I'm so excited about this release. It's the first book I've ever written and Daedalus is the my favorite hero. *gush*  This week, if you leave a comment, your name will be entered in a release contest. I'm giving away a bag of Green Mountain Coffee. Anyone who reads my blogs at Paranormal Romantics knows how much I love my coffee. I'm blogging there today so if your looking to oogle some bald beauties mozy on over there. I'll announce the winner next week. I'm also hanging out over Love Romance and More. 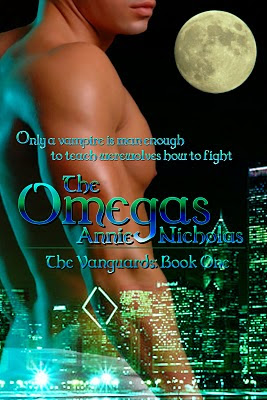 Only a vampire is man enough to teach werewolves how to fight.

Pretty librarian Sugar wants her life to stay quiet. That’s hard enough when friends and neighbors turn into furry wolves every full moon. But when a hot vampire gets involved, life’s bound to get complicated.

The Omegas have always been the pansies of the paranormal. Now Chicago’s top werewolf pack has issued them a life or death challenge. Their only option: hire a vampire warrior to teach them the moves.

Daedalus has been a powerful vampire for ages. Intrigued by the chance to train the geeks of the underworld, he wasn’t bargaining on losing his heart to a human. Can he make the Omegas a success, fit into Sugar’s quiet life, and avoid being ripped to shreds in the process?

Sugar walked to the Omegas’ apartment. Quiet dominated their corner of the building since Mr. Pal Robi’s arrival last week. She’d seen them when she went out on her garden balcony to water the plants last night. They jogged with their vampire trainer on the sidewalk. He ran, and they straggled behind. Other than that she hadn’t seen any of them. No one came over to visit. Not even Katrina, who had become a permanent fixture in her home.

She stood in front of their door and wiped her sweaty palms on her old, worn jeans. Maybe I should have changed.

The thought irritated her. She’d never worried about her looks before he moved in. She’d never lusted after a man like this either. Her past lovers always started as emotional relationships, then grew into something physical. What she experienced with Daedalus seemed more animalistic. If she made out with him and got it over with, then maybe her mind would clear. The memory of his sexy half-smile with a wink haunted her every night. Those blue eyes, broad shoulders, firm body, bald head--

The apartment door swung open, and the demon of her fantasies stood staring at her, shirtless. A thin sheen of sweat covered his pale skin as if he’d been doing some vigorous exercises. It made him shine. The circular tattoo she’d glimpsed through his shirt on their first meeting covered his heart, a black snake eating its tail.
He gave her a crooked smile, melting her to the spot. “Hello, sweetness. I got tired of waiting for you to knock.” He stepped back and gestured for her to come in.

As she entered the Omegas’ apartment she noticed the place looked cleaner than usual. Five wolves under one roof could make quite a clutter. Daedalus must have them run a tighter ship.

“How did you know I was out in the hall?” A little shaken after his sudden appearance, her concentration slipped and she couldn’t remember her reason for being there. His being half-naked didn’t help.

“I have a good sense of smell.” He closed the door behind her.

“You smelled me? Good to know for future reference.”

Fingers ran through her curls as she walked past him. She glanced at him, but his back faced her while he locked the door. It must have been her imagination. The touch felt real though. Did he move that fast?
He finished with the locks and turned around. “I heard you walk down the hall too. Why were you waiting?”
She didn’t know, looking for some courage maybe or a little self-confidence with an internal pep talk. “I was thinking about going back for a book Sam wanted to borrow,” she lied. Something unsettling occurred to her. “Can you read minds too?”

He chuckled and leaned in close, his nose almost touching hers. “Possibly. Are you thinking dirty thoughts?”

“No!” Her cheeks burned.

Did that mean he was thinking them?

He brushed past her to sit on the worn, beige couch. His touch sent a thrill through her, it unnerved her too. He tapped the cushion next to him.

Out of her element around him and his flirtatious ways, she sat in the armchair across from the couch. His request to sit next to him ignored since she couldn’t trust herself to not jump on his lap. Her lack of self-control surprised her. She allowed her eyes to roam his handsome face to his bare chest, each time she jerked them back up to meet his stare, they’d meander back down to those well-defined muscles.

An unfamiliar quiet filled the living room, where laughter and banter normally flooded the space. “Is anyone else home?”

“No.” He leaned forward, resting his elbows on his knees. The heat in his gaze grew as he made his interest in her clearer. “We have the place to ourselves. What did you have in mind?”
Posted by Annie Nicholas at 7:00 AM
Email ThisBlogThis!Share to TwitterShare to FacebookShare to Pinterest

Congratulations on your debut release! Thank you for the excellent excerpt.
I'm going to buy THE OMEGAS on payday.
xoxo

Annie, congratulations on your release. You're on a roll!

Congratulations on your new book! Wishing you many sales.

Yay, I thought I'd be drinking coffee by myself next week. LOL

Hi Annie :)
Congrats on your debut release, the excerpt is GREAT!
Do you plan to follow up on the Omegas?
Gotta get your book 8D

Congratulations on your debut release, Annie.

Good luck with the sales. The excerpt sounded great.

Congratulations on your debut release. The cover is fantastic and the premise is great. Can't wait to read this.

Thanks. I love this cover. *fans self*

a big congrats on your debut release; you got a nice cover for your first book.

thanks for letting us peek into the book so to speak.

Congrats on your debut novel; you must be really excited.

I read the excerpt and want more! I can't wait to read it.

A lady after my own coffee!! I love coffee. I like the flavored. I guess my favorite is Hazelnut!!

Also congrats on this release and the great reviews it is getting. It does sound great!!!

Congrats on your new release, Annie! Hooray for the start of a terrific new series!

Congratulations Annie on your debut book. What a rush this must be for you. I wish you much success and hope to read this one soon.
Loved the excerpt and I love Vamps and Werewolves. :)
Carol L.
Lucky4750@aol.com