Welcome to the blog tour! If you just found this blog click HERE to go to the beginning. Leave a comment at each blog and your name will be placed in a drawing. This tour we're offering plenty of books to fill your e-reader as prizes:

Waiting for the Big One by PG Forte
Flash of Dark by Sara Brooks
Rip Cord by Jeanne St. James
Doll by Juniper Bell
Once Bitten by Trina M. Lee
Huntress Prequel by Trina M. Lee
Bound by Deception by Christa Paige
Preja Vu by Alanna Coca
For a Price by Olivia Brynn
Fireproof by Tina Holland
Destiny's Magick by Rae Morgan
Alitus, Tales of the Chosen by Kayelle Allen
Satisfy Me by Madison Scott
Baptism by Fire by Keira Ramsay
Black Cat Beauty by Savanna Kougar
Intimate Strangers by Gem Sivad
Bait by Annie Nicholas    <--- *me*
Breathing Shallow by Stephanie Adkins
The Company of Fools by Annemarie Hartnett
Choice of two books by Lexi Ryan
Safe from the Flames by Sandra Sookoo
Hearts Afire December by Elise, Ella, and Emily


Since all my releases this month have vampires in them I thought we'd play a little game. Here's a list of pictures of main stream vampires.

(Yes, there is a difference for the true Buffy fan. LOL)

Here are the blurbs for my releases this month.

Only a vampire is man enough to teach werewolves how to fight.

Pretty librarian Sugar wants her life to stay quiet. That’s hard enough when friends and neighbors turn into furry wolves every full moon. But when a hot vampire gets involved, life’s bound to get complicated.

The Omega have always been the pansies of the paranormal. Now Chicago’s top werewolf pack has issued them a life or death challenge. Their only option: hire a vampire warrior to teach them the moves.

Daedalus has been a powerful vampire for ages. Intrigued by the chance to train the geeks of the underworld, he wasn’t bargaining on losing his heart to a human. Can he make the Omegas a success, fit into Sugar’s quiet life, and avoid being ripped to shreds in the process. 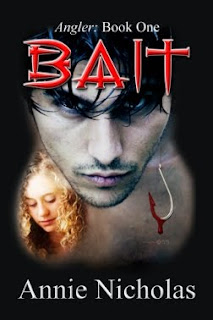 Sent on a mission to lure Budapest’s vampire Overlord into a trap, Connie Bence is instead caught red-handed by the dark Casanova. Her employer has concrete proof of the dubious leader’s misdeeds but she is surprised when this ruthless killer, Rurik, offers her protection and rescues her from his own kind. It plants seeds of doubt in her mind and she begins to question his guilt. Now she is thrown into his world where blackmail determines her every move and where she must betray those she cares about or let them die. The stakes are high. She either puts her trust in Rurik or leads him to his execution.

Next on the tour is Olivia Brynn

Posted by Annie Nicholas at 10:57 PM
Email ThisBlogThis!Share to TwitterShare to FacebookShare to Pinterest

Woops! Your next stop on the tour should be Olivia Brynn's blog at
http://oliviabrynn.com/blog

Appearance wise, I would say Brad Pitt as Lestat. He was so sexy!

I have to agree with you Becca. I love a bad boy and Angelus would be my choice.

Congrats on the release. Angelus has always been my favorite.

angelus was bad. he was crazy u all. sorry i'm just getting into buffy. Fyi they just started playing reruns of it on logo channel. anyway I'll take louis please

That was Keifer Sutherland as David. I love Keifer in anything! Only 48 hours till 24! :)

Eric is my favorite... such a bad boy but soooo goood

Hmmm... I always thought a combo of Angel and Spike would have been the most interesting and entertaining.

Congrats on your two releases!

Omegas looks terrific!! I hope you have a lot of success with it!

Eric is my favorite since he's so good at being bad!

It would have to be Angel/Angelus his eyes are just so sexy. Well everything about him is sexy. I have to admit I started watching Bones just so I could see him.

Eric. He is just so bad he's good and he has a body that doesn't quit.What a great contest. Thanks for being part of it.

Spike and Angel are always my top picks.

i didn't see the one from queen of the damned. he's a good one.

Eric is my favorite. He's one vampire I'm sure I wouldn't be able (or want) to resist. Can't wait to read Bait, it's already in my TBR.

Favorite is Spike because of his whit and badassness

My favorite was Antonio Banderas as Armand. That accent and fangs. Oof.

I love seeing Edward in the interviews! All hot pics!
cathiecaffey(at)gmail(dot)com

wow, lot of Angel fans out there.

Sigh... I think I might have to break down and get a copy of The Omegas. That looks too good to pass up.

Angel, then Spike, then maybe, well, I guess them all. sigh..