Year of the Rabbit Blog Hop!

Easter involves all sorts of fun and family get  togethers. It also involves candy.

I can't send everyone sweets but...

I do have mancandy for you.

I'm starting to really like curly hair on men.

Is that the French flag? 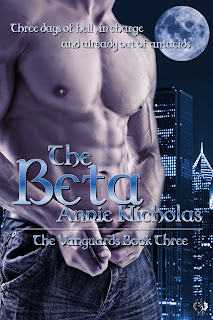 Oh yeah, the cover of my coming release.
Three days of hell, in charge, and running out of antacids.

﻿As the pack’s Beta, Robert needs to watch over the Vasi werewolf pack for a few days. He hates the responsibility, but his job is to dissolve any problems while his alpha honeymoons. Nevertheless, trouble comes to town and her name is Esther. She's beguiling, beautiful and picks his pocket. Although Robert doesn’t trust her, he still wants to possess her.
Esther arrived in Chicago with the intention of slaying a vampire named Daedalus. While trailing her quarry, she encounters Robert who unhinges her world. He doesn’t know her trade, and she doesn’t know his connection to the vampire. Disturbed by her attraction to this unusual werewolf, she can’t decide which prey to hunt. The one who’s stolen her heart or the one who’ll fill her bank account.


ps. I'm guest blogging at Whipped Cream Reviews. Leave a comment THEIR SITE and get entered to win a Nook or 150$ GC.

Annie Nicholas
Posted by Annie Nicholas at 9:33 PM
Email ThisBlogThis!Share to TwitterShare to FacebookShare to Pinterest

The first picture is my fav. Happy Easter! :)

I like your candy better! Thanks for sharing and happy easter!

DAG, those pictures are great and your cover rocks! THanks for sharing.

Have a great Easter to All.

How sweet it is! Happy Easter and thanks for the candy!

Great pics...Wishing you a Happy Easter..

The mancandy will do nicely, thank you!! Happy Easter!

Thanks for the very nice Easter candy!

Fantastic mancandy!! Thanks, I needed that! Your book cover is also hot!!

Love the pics! Happy Easter!and wonderful and sunny week-end your page is well created I like the color and desing
Chees

Those are gorgeous men and I already use some of them for my desktop backgrounds.

I love me some mancandy ;)
Happy Easter

Love the mancandy and the your cover! Thanks for sharing! I hope that you have a hoppy Easter!
jessangil at gmail dot com

*DROOLING* I'd love to man your candy! Thanks for sharing the hot pics and excerpt. Have a great Easter.

My, oh my, Annie! Love those Easter treats ;) Thanks, and looking forward to your latest!

Hey Ms. Nicholas. I have your new book on my wish list. Can't wait to get my hands on it. Love the cover on 'The Beta" and the excerpt is yummy.

Very inspirational. I love the sound of your new book. You had me at werewolves.

Great site! I'm glad I stopped by. Have a wonderful Easter weekend!

The Beta sounds great and I love the cover! Happy Easter!

Man Candy it was!!! Thanks for the eye pleasers!
Your book sounds great, I loved the excerpt. She is definitely up to no good.

Have a Happy Easter!
~Afshan

Yummy candy and no calories. Thanks! Happy Easter!

I have really enjoyed the other Vangaurd books and am looking forward to reading The Beta...

I am loving the man-candy you have so generously provided! Seriously, seriously nice pics.
Thanks!

Love your cover too.

Yum! On the Mancandy... fab cover and fascinating blurb... wishing you every success.

Hoochie! I literally hyperventilated at the wet pic ;)

Hoooooie, I've never been into mens underwear like I am now!! ;)

Bless you and Thank You for sharing!! :)