When I think of sizzling hot summer nights, I imagine beach parties. This reminded me of a short story I had written for my readers. It's a prequel to Bait and introduces Connie in her new job as vampire bait. 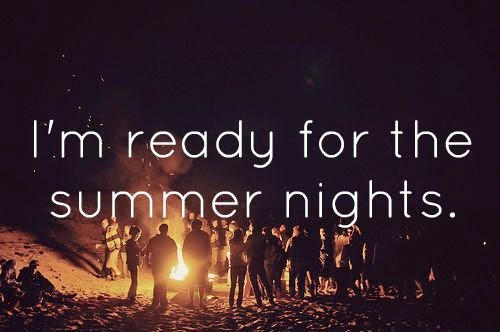 
(A prequel to Bait)

Live bait came in all shapes and sizes. Colby, my new boss, said I fit the mold and offered me enough money to make me reconsider my belief system that humans were on top of the food chain.

Vampires? I’d seen one with my own eyes in Las Vegas. Heck, I watched Colby kill it to save my life, yet part of me still wanted to cling to my old reality where the most dangerous thing that bumped in the night was a criminal.

How hard could it be to lure vampires?  Connie Bence was now on the menu.

After a whirlwind week of training, I stepped onto the Jamaican beach and joined the huge summer party. Heavy grief still tore at the hole in my heart. Somehow Colby had taught me how to bottle it so I could paste on a smile while in public.

I lived only half a life. By day a fresh widow, by night a vampire happy meal.

The humidity coated my skin in a thin sheen of sweat and my blond curls stuck to the nap of my neck. Why didn’t I bring a hair band? Swallowing around a lump in my throat, I stripped down to a red bikini, leaving my shorts and t-shirt in a pile on the sand.

Colby had told me to catch attention.

Music played from a radio set on the rocks by the beach. My heart beat in time with the tribal rhythm. Soft sand squeezed between my toes and salt air filled my lungs. Could I pull this off? I moved through the dancers by the bonfire, sweat beading on my forehead and my limbs. The hot tropical night wasn’t the cause though.

This was my first assignment. If I screwed up I wouldn’t get fired, I’d be dead. Nothing like placing my life on the line to make me want to stay alive.

I swung my hips to the music, dancing without a partner and pretending not to have a care in the world, when in reality I’d been crushed under death’s heel so many times I didn’t know how it felt not to hurt. No one cared.

The crowd parted and my heart dropped so fast I had whiplash. My mark stood on the fringe of the flickering firelight, watching me with dark, hungry eyes.

I took a shaky breath and shuffled my feet in pretense of dancing. Shit. All my instincts screamed run away!

Glancing at him again, I struggled to breathe as my throat went drier than the snap of static electricity. I was bait. Keep it together. This was my job. If I didn’t do this, he’d kill another girl tonight.

Oh crap, my mental shield. Had the vamp heard my thoughts? Shit, I shouldn’t think vampire out loud. I scrambled through the mind exercises Colby taught me even if it was a little late in the game.

The vampire’s pale skin stood out among the tanned bodies. Even in the heat of the island summer he wore jeans and t-shirt where everyone else had stripped to their bathing suits. His name was Reynold and he’d murdered nine young women in the last two months.

Colby had been hired by the local shaman to stake the bloodsucker and I wanted to watch. The only good vampire was a dead vampire.

I wiped my forehead with the back of my hand. Thirst burned in my body and I needed something cool. Glancing over my shoulder, I noticed an ice chest brimming with beers and sodas. Vampires could drink. Maybe I could offer him one? I whirled around but my mark had disappeared. Damn it. Where’d the sneaky bastard go?

Searching the crowd, I couldn’t spot him. Then again, at five foot nothing I didn’t see much. I wove around partiers, trying to hurry without appearing desperate. If he killed again it would be my fault.

Someone tapped me on the shoulder and my gut clenched. I spun around.

Reynold stood in a spot that was vacant a second before. Lean muscles moved under the smooth skin of his bare arms as he offered me a cold soda.

I could have hugged him. The last thing I wanted was to lose my first vampire. Getting him to try and eat me could prove to be more difficult than I’d thought. Would he grow suspicious if I asked him to walk with me along the beach?
He smiled and the firelight glinted off the tip of a delicate sharp fang.

Most humans would have missed it but I’d been taught somewhat to spot the signs of vampirism. Yet all the training in the world couldn’t have prepared me for this moment. A real live—well dead—vampire. I stepped away but quicker than my eye could follow, he grabbed my elbow.

“No fear, ma cher.” He rolled his r’s like a true Frenchman could. His long, graceful fingers easily wrapped around my arm. I could sense the iron strength in them. His mind tried to roll over mine. “You looked so thirsty. I can sympathize.” He offered me the can of soda again.

Who’d have thought death would be kind enough to get me a drink? If I ran maybe he’d follow? We’d be alone on the beach, away from the party with no witnesses. I stared at his handsome face and pictured kissing those full lips.

Wouldn’t it be nice to be alone?

That thought and image came from a foreign place. It didn’t belong to me. Colby showed me how to build a mental shield around my mind to keep vampires from mesmerizing me, but I was an amateur playing a dangerous game. The idea of this jerk in my head scared me more than him biting me.

The vampire’s smile grew wider and he leaned close to my ear. “You know what I am.”

In stupidity, I shook my head. The denial confirmed my knowledge just as much as if I’d said yes. I should have done the silly blond act I’d been practicing and looked confused. Hindsight was a bitch.

“I’ve already fed tonight.” His words hit me. It meant he had already killed. I’d failed and it cost someone their life. He placed the drink in my hand and slipped an arm around my waist.

I squeezed the canned soda until it bent in my grip. If only I could brain this monster with it.

The music changed to sultry jazz.  “Perfect.” The word purred from his lips as he stepped to the rhythm and pressed me to his body.  “I do love to visit the islands in summer. Fewer tourists and…” He leaned away to trail his gaze down my bikini clad body.  “All the pretty girls run around dressed like this.” He quirked an eyebrow my way. “Can’t dance?”

I chugged a few swallows of soda to ease the nausea storming the gates of my throat then tossed the can. Time to get this over with. I smiled at my prey and slipped closer to his body. “Show me.”

Leading us away from the bonfire, we danced out of the light.

He ran a finger down my neck, pausing over my pulse.

“I thought you fed.” My voice trembled as I retreated, leading him further into the wild shrubs and away from the party.

“Doesn’t mean I don’t want a small taste.” He leaped the space that separated us.

To my horror, I screamed and turned to run. I didn’t get far. Instead, I bounced off a solid wall of slayer flesh and landed on my tush in the sand.

Colby strolled between us, a wooden stake in hand as planned. His predatory grace rivaled Reynold’s. Strong and fearless while facing a monster yet cold as a blade of steel, Colby never made me feel comfortable, but I’d take his protection any day. Or night. God forbid I ever got on his bad side.

“Merd.” Reynold slammed on his brakes while his gaze drew to one of the few weapons that could actually do him damage. He twisted mid-retreating step and ran through the slippery sand with unnatural speed.

I rose to my knees and peered into the firelight striped darkness.

Colby somehow kept pace and stabbed Reynold through the back before he reached the party.

Not a single human had noticed the battle ensuing just outside their sight. Their music had made them deaf to my scream.

I raced to Colby’s side.

Reynold fell to his knees clutching his chest as his flesh crumbled around the stake, his ashes mixed in with the sand.

My stomach turned and the soda threatened to come back up. “I thought you had to get them in the chest?” I couldn’t seem to catch my breath.

Colby glanced at me over his shoulder. “As long as it goes through the heart the stake will kill them. With the older ones you need to chop off their heads as well.”

Images of decapitated bodies came unwanted to my mind. What the hell had I gotten involved in? The soda didn’t taste good the second time around as I turned away and threw up.

Colby offered me a cotton handkerchief. Who still carried those?

The world spun a little when I straightened and cleaned my mouth, but somehow I found the strength to lock my knees and meet my bosses’ steady green gaze.

Colby wiped his bloody hands on his shorts then ran them through his messy blonde hair. “Good work, Connie. Welcome to the team. We always need fresh bait.”

If you liked this story, the novel Bait that inspired it is free at all etailers like Amazon, B&N, and Apple.

For a chance to win a signed print copy of Ravenous, prequel to Starved for Love.

Posted by Annie Nicholas at 1:00 AM
Email ThisBlogThis!Share to TwitterShare to FacebookShare to Pinterest

Bait was a great book, Annie. Loved the story!

I've read and enjoyed many of Annie Nicholas' books but so far my favorite is Scent of Salvation. Her new series rocks, so if you haven't checked it out do so at your earliest opportunity!

I loved reading that excerpt! =) Thanks for the free book! I plan on starting to read it tonight. =)

Thank you for the giveaway!

Thanks for being a part of this FUN blog hop! I just got Bait I can't wait to read it.

The book sounds great! I'm having a lot of trouble with the giveaway from though as it won't acknowledge my tweet and let me move on to the next entry. Thanks for your generosity though....

Thanks for the excerpt! Great addition to my summer reading.
Mel
bournmelissa at hotmail dot com

Thanks for the giveaway & Happy Sunday!
//Linda
fr_larsson at hotmail dot com

Thanks for the excerpt.

Shelly is the winner! I just sent you an email. :)