Sins of the Undead Patriot by a.c. Mason

Here's a perfect read for the Halloween season and an electorial year!


To save the President, Vaihan must trust the woman who betrayed him.

Vaihan Louchian, Ancient Zombie and Special Advisor to the President, dabbles in contracts for Homeland Security in Washington DC, the only remaining demilitarized zone. His latest mission: to seduce delectable Leera Waltz so he can take down her boyfriend Rowley, leader of the anti-zombie terrorist movement. Vaihan and the President work the Bill of Undead Rights through the Senate, but terrorist attacks rise. The futures of the living and undead are in jeopardy, and Ms. Waltz is not all she seems. Vaihan can’t help being more interested in rescuing her than in his assignment. Any human female who’s willing to put up with the complications of lovemaking with him and his bouts of OCD is worth the hassle.

Vaihan is powerful, intelligent and kind. So not what Leera expected of an undead. When she’s forced to betray Vaihan, she knows he will never understand. She must return to Rowley, and slips deeper into the city’s dark underworld. Then Vaihan’s suspected in an assassination attempt against the President, and Leera has to find the courage to do what’s right and save him, or lose not only Vaihan and the leader of the free world, but her heart and soul.

WARNING: Questionable sexual situations that will disturb some readers, such as abuse, bondage and drug use. Graphic violence and sex, including taboo play. M/F. M/F/M. M/M. And the sexiest undead civil servant you’ll ever meet. 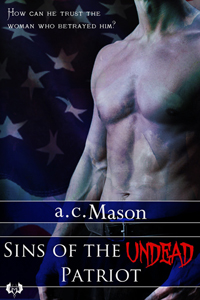 She darted a look at him, eyes shimmering with tears. Wind tossed her curls in all directions. What a horrid feeling indeed, to be trapped among the living when all you wanted to be was dead. Once, he too had longed for the cycle to end, but not anymore. Not in a long time.

“Don’t come over here. My mascara has made a mess of my face.” She bent toward the side mirror of the silver SUV, her plump bottom pushed out.

“It’s going to take a lot more than smudged makeup to do that.” He cocked his head to admire the seam between her thighs. “You’re gorgeous.”

The corner of her mouth twitched upward. “You are some kind of smooth talker.” She lifted upright then spun toward him.

Admittedly, he stood too close but he itched to touch her again.

When she attempted to step back, he scooped his arm behind her, resting his fingers against the bare skin of her open-backed gown.

A breath hitched at her lips. As her heart rate accelerated, her eyes widened with fear.

She wrapped her hands around the upper part of her body, creating a barrier. Goose bumps covered her exposed arms.

He unfastened the buttons of his jacket, slipped off the garment and then rested it on her shoulders.

“You don’t have to.” Her gazed traveled from his neck to where two buttons were undone on his dress shirt.

Did she like what she saw? For now, he’d content himself with not finding disgust in her eyes. As her dark gaze rose, it met his, and her body relaxed. A run of black makeup was smeared beneath her eyes. He pressed his thumb to her skin, wiping away tears and mascara.

She reached for his hand, then pressed his flesh to hers. “You’re so hot.”

“I’ll have you know, I’m not just good looks.” He let his hand rest in the small of her back.

“I meant your skin.”

“Of course you did. I’m undead. My appearance is usually a cause for fear.” Most of his kind paid for human female companionship. He’d never needed to. Zombies had their own underground scene. Lavish nightclubs, where humans offered themselves up blindfolded, tied up and bound to the wall or ceiling in exchange for a taste of poison. These places provided a safe environment where the undead could feast on the living in a number of ways.

Not his cup of tea.

“Hmm.” She angled her head. “Given the lines of your brow, nose and lips with the structure of your jaw, I’d say you’re easy on the eyes.”

In mere moments of knowing him, she’d been able to see him as more than his scary exterior.

“Undead of my persuasion have a body temperature that is about six degrees hotter than humans.” With his index finger, he tucked a rogue curl behind her ear.

“Guess that’s why I’m not chilly anymore.” She met his stare.

“Here I thought the change was your attraction to me.” He smiled.


Born from the union of her Scottish and Belgian mother and an African American and Cherokee father, a.c.Mason’s youth was filled with dichotomies and moving from place to place. She developed a curiosity to explore through writing the seedy side of our nature and desires. Given her own diverse background, she writes stories that represent the world she grew up in. She is fluent in French and English. For the past nine years of her life, she has worked with one foot in the past spanning from 18th century, the Bering Strait theory to modern day and now late Victorian and WWII. Her stories are the place where darkness meets human desire and fairytales endings are not promised but earned. She’s a founding member of The Cultural, Interracial, and Multicultural Special Interest Chapter of Romance Writers of America.


If you’d like to learn more about a.c. Mason go to www.acmason.com.

Posted by Annie Nicholas at 12:30 AM
Email ThisBlogThis!Share to TwitterShare to FacebookShare to Pinterest