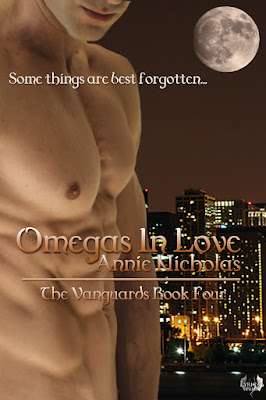 Omegas in Love
Book 4 The Vanguards series
(Tyler and Katrina)

This excerpt takes place after Katrina is abducted by her old alpha. Tyler and Eric are searching for her and got a reliable tip as to a possible location.﻿

“I don’t see anyone around.” Tyler twisted in his seat to get a better view of the house. God, Katrina could be just a few buildings away as he sat here useless.


“Doesn’t mean anything.” Eric glanced at the parked cars on the streets. “I don’t see Robert or Esther.”

The skin on Tyler’s back crawled with thoughts of what could be going on inside, behind closed doors. He glared at his alpha. “Don’t tell me you’re going to make us wait for them.”

“Fuck.” Eric banged his hand against the steering wheel. “No.”

Tyler opened the passenger door to spring out, but was strangled by the collar of his t-shirt when yanked back inside.

Eric loomed over him. “Stay behind me. Don’t get killed, okay?”

“Got it.” He gave his alpha a friendly slap on the face. “I’ll follow and not trip you up.” Nothing was going to keep his scrawny ass from rescuing his mate.

Nodding, Eric released him and exited the truck. They traveled toward the house.

It felt like every home owner on the street peered at them through the curtains, the sparse street light casting deep shadows, hiding any number of enemies.

Tyler’s limbs trembled with contained energy. Zipping over his nerves, the impulse to fight became hard to resist. He called his beast to come closer to the surface so he could shift in an emergency. If things got physical, his beast would take over.

“What if we have the wrong address?”

“Oh.” That would be a one-way ticket to the pound. Shifter attacks had a zero tolerance with law enforcement. They’d get put down. “Crap. What do we do?”

They climbed the stairs to the front door. The small lawn consisted of more weeds than grass, the lights were off, and Tyler couldn’t hear anything inside. Even with his shifter hearing. He glanced at Eric, who met his gaze and shrugged again.

Eric knocked on the door.

Tyler didn’t bother to wait. He grabbed the doorknob and twisted it with his shifter strength until the lock popped.

“What are you doing?” His alpha tried to shout and whisper at the same time.

“Breaking and entering, so keep it down.” He was wasting time, cooling his heels on the front step while Chen and his men could be escaping out the back door.

“What if this is the wrong house?”

Tyler stopped mid-step as he crossed the threshold. “Not thinking that far ahead right now, but I’m not hearing an alarm, so all’s good.”

Ignoring his alpha’s displeasure, Tyler entered the house. Nothing moved. Dark shrouded the first floor. He glanced around the corner and almost shifted on the spot when Eric grabbed his arm.

“Let me take the lead.” He shouldered past Tyler. “Watch our backs.”

Releasing his breath, Tyler followed farther into the house. The rooms were all empty. No furniture or pictures, not even a rug on the floors. He sniffed the air. Katrina had never been inside this building. As her mate, he could have picked up a trace amount of her scent. “Are you picking up any of Spice’s smell?”

“Nada.” Eric stopped whispering. “This place is a bust.”

“Doesn’t look like it’s been lived in for awhile. Why would they send us here?” His gut clenched with a little gasp.

“Run!” Eric barked, pushing him toward the door with all his might.

They raced for the entrance and tumbled down the stairs. Sprinting up the street as Esther’s car rounded the corner and drove toward them. They’d made it past two houses when a light flashed and a giant hand of kinetic energy swatted them. Flung off their feet, Eric landed in a roll, tumbling a few times. In contrast, Tyler crashed into Esther’s car, leaving an imprint of his face on her hood.

She slammed on her brakes and he slid off the cool metal to puddle in a tangle of limbs on the pavement.

Tyler lay on the street for a moment, his ears buzzing with a high-pitched tone. A cloud of dust particles washed over him. He blinked them from his eyes, unable to move his arms yet. “I’m not made for this kind of shit.” He felt the words in his throat but couldn’t hear them.

A few seconds later, sounds began to drift back in. Car alarms, people shouting, sirens--lots and lots of sirens--were drawing near fast.

Esther slipped beneath his arm and helped him stand. “We need to not be here.” She guided him to her vehicle.

“I’ll pay to fix that dent.” He pointed to her hood.

On the short journey to her car, Tyler spotted Robert assisting Eric. Flames reflected in Esther’s windshield. The house was on fire. “Damn, they tried to blow us up.”

Esther pushed on his head to make him duck, and shoved him in the back. Jumping in the driver’s seat, she waited for Robert to get in before putting the car in reverse. “We need to get out of here before the police cordon off a perimeter.”

“Shouldn’t be hard.” Robert texted someone on his phone while he talked. “Chicago PD can’t organize something that big, that quickly in the dead of night. They’ll need to call and get people out of bed and on the job.” He twisted in his seat and glared at them. “What the fuck happened?”

“The house went boom.” Tyler closed his eyes and rested his head against the seat. He listened to Eric explain their stupid reasoning for entering the quiet house. He’d almost gotten his alpha killed. Where would the pack be without Eric? From now on, he needed to think with his head, not his heart.

Posted by Annie Nicholas at 10:44 AM
Email ThisBlogThis!Share to TwitterShare to FacebookShare to Pinterest