Why Do We Like Paranormal Romance?
By Jeri Westerson

What is it that buffs up Buffy? Why do we root for Sookie’s vamps? Why do we care that Bella goes bat instead of wolf?

We do care. We like our fiction fictional, and romantic, and magical. We like it to have adventure and a twist of the supernatural. These hunks are special in a way our mundane beaus can never be. And they are also oh-so-romantic.

Some have traced the history of paranormal romance to gothic romances, with a dark and brooding protagonist and a vulnerable female lead who must survive by hiring herself out to be a governess out on the moors, with some mystical element hovering over the proceedings like a cobwebbed shadow. But I think it goes back much farther. Even biblically. When angels mated with Man and created the Nephilim. But the first identifiably paranormal romance—that is, a feisty young woman who falls for a supernatural or beastly hero—must be the tales of Beauty and the Beast. It’s a tale as old as time…and stop me if I rhyme. (Oops. Too late.)

Actually, it’s at least as old as 1740. In French it’s known as La Belle et la Bête, and is credited to French novelist Gabrielle-Suzanne Barbot de Villeneuve, where created her own “modern” fairy tale when she published her version in La Jeune Américaine et les contes marins (The Young American and Marine Tales).

This is not to be confused with someone like The Wolfman, the Lon Chaney movie written for the screen by Curt Siodmak, who invented the scenario of the Gypsy, the full moon, etc., taking the idea of a werewolf from older sources and creating the mythos for werewolves that writers have stolen ever since. Because, you see, his love interest didn’t love the wolf, nor did Chaney’s character Larry Talbot learn to love the wolf, either. In Beauty and the Beast, the beast is obviously someone we all like much better than some snooty prince. We root for Belle and the Beast; not so much Belle and the Prince.

Even Bram Stoker’s vampire in his novel Dracula, written in 1897, wasn’t the sexy vampire we’ve all come to know and love…until the stage version in 1924. Then the monster became a refined undead man in a tail coat and boiled shirt. He got sexier with every new iteration. It took a while for audiences to get with the program, but they did, and some fifty years later, Anne Rice gave us Interview With A Vampire, and we haven’t looked back since. 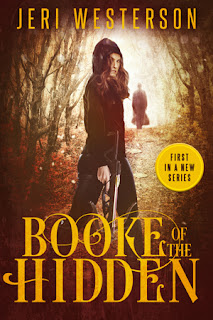 In my new series, BOOKE OF THE HIDDEN, Kylie Strange unwittingly opens an ancient book she finds bricked up in her new herb and tea shop, and unleashes supernatural creatures into the world that she is tasked with returning to where they belong. But she also releases the Guardian of the Booke, a demon called Erasmus Dark, a brooding and sexy fellow who claims he’s here to help her…but that might be a lie.

Why is supernatural sexy? Well, who wouldn’t want one’s boyfriend to have special powers? It also makes him strong and able to kick ass. But it also makes him broody, and somewhat unhappy with his lot in life. Who’s gonna make him feel better? Why, that feisty young woman in the tale, that’s who. Now these days, she kicks as much butt as the hairy-faced protagonist, with not only the inner strength of a Belle, but with the fighting fists of a Buffy or Laurel K. Hamilton’s Anita Blake. Maybe these tales aren’t quite as old as time, but romance is. And when boy meets girl in a paranormal romance, we know—and love—that the fur is gonna fly.

Award-winning author Jeri Westerson likes to make a little magic with her new paranormal series, BOOKE OF THE HIDDEN, the first of which will be released on Halloween! See her “booke” trailer, her Pinterest page, friend her on Facebook, or read an excerpt on her website BookeoftheHidden.com

Bio:
Los Angeles native JERI WESTERSON is the author of ten Crispin Guest Medieval Noir novels, a series nominated for 12 national awards from the Agatha to the Shamus. Her first in the series, Veil of Lies was named Editor’s Choice by the Historical Novel Society Review, her third The Demon’s Parchment received a coveted starred review by Library Journal, and her sixth, Shadow of the Alchemist, was named Best of 2013 by Suspense Magazine. Also in 2013, her fifth novel Blood Lance was named one of the Ten Hot Crime Novels for Colder Days by Kirkus Reviews. For her debut urban fantasy series, Booke of the Hidden, releasing this Halloween, Jeri was invited as a paneled author to the upcoming Dragon Con. Jeri was featured on two local NPR shows, ‘My Awesome Empire” and KVCR-Arts. She has served as president of the Southern California Chapter of Mystery Writers of America, as vice president for the Los Angeles Chapter of Sisters in Crime, and twice president of the Orange County Chapter of Sisters in Crime.  She frequently guest lectures on medieval history at local colleges and museums, and lives in southern California with her home-brewing husband, a complacent desert tortoise, and 40,000 bees. See more about Jeri at JeriWesterson.com or visit BOOKEoftheHIDDEN.com for exclusive content about her new series and a fabulous “booke” trailer.
Posted by Annie Nicholas at 10:33 AM
Email ThisBlogThis!Share to TwitterShare to FacebookShare to Pinterest

Thanks for hosting me, Annie!