Sinful Cravings is book 2 of my Lake City Stories and is the book after Starved for Love. Pia is my favorite character to write. She pours out so easily. It's like I start her book and two weeks later I wake up and it's finished. All novels should be this easy. LOL
This one is releasing in August 2014. I don't have a date yet because I'm scattered that way. 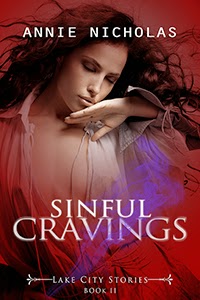 Pia Blyton, a succubus, isn’t ready for an official engagement since her skillset consists of setting kitchens on fire, singing at vampire hellholes, and most embarrassingly, she recently passed out in bed while feeding Valerio Hunan, the most eligible incubus in Lake City. Yet somehow he turns a blind eye to all her faults and still wants to set his marriage tattoos on her wrists.


The compulsion to have sex forces their people to have unconventional relationships. Every three days, she has to orgasm creating energy to survive. She can’t even live off bad sex. Unlike her, Val can’t feed off just anyone. He consumes the energy only a succubus creates and his hunger isn’t on a clock. Most incubi feed legally by luring multiple succubi into marriage with money and power. Val had caught Pia by the heart strings. Sneaky bastard.


When his food supply suddenly stops, he’s faced with starvation. Despite Pia’s adoration, she’s not an all you can eat buffet. He would suck her dry of all her life force within days. In order to save her, Val forces her to leave. With nowhere to go, Pia ends up at the last place she wants to be—her parent’s home, with nothing but her pink suitcase and a list of all her failures.

Pia needs to pull on her big girl panties and figure out why Val’s energy supplies have stopped arriving before he kills some unsuspecting succubus. But the demon inside Val is closer to the surface than either of them realize. When Pia leaves, the only thing on its mind is tracking her down and dragging her back into its bed where she belongs...even if it kills her.
Posted by Annie Nicholas at 10:59 AM
Email ThisBlogThis!Share to TwitterShare to FacebookShare to Pinterest