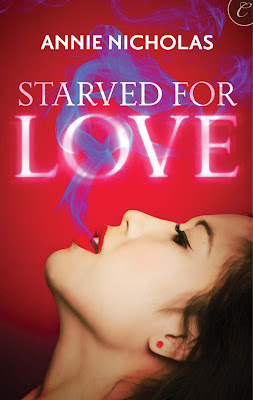 After almost dying of starvation to remain faithful to a mortal lover, succubus Pia Blyton now shields her heart by feeding solely on men she won't fall for. The only trick is, to create energy to survive, she must achieve orgasm. At least that rules out bad sex with her three lovers. Too bad she's a sucker for falling in love.


When her demon lover doesn't arrive for their arranged rendezvous, Pia is forced to ask her vampire lover to step in before her energy becomes dangerously low. In return he demands a favor and Pia finds herself in the hotel suite of the mysterious Valerio Hunan, who seduces her with a devastating kiss. Too late Pia learns he's an incubus who wants to lure her into marriage—a marriage without love.

As an incubus used to bedding a variety of succubi, Val doesn't understand Pia's yearning for love. He needs a succubus wife to provide him with a steady source of energy. But he wants Pia for the passion and renewed interest in life she makes him feel. Can Pia convince Val that sex isn't just for survival and love is for more than the weak?

Sex and love should come in the same package, but for a succubus, that meant trouble. Sex equaled food and fidelity couldn’t be part of the equation. Humans couldn’t eat the same thing every meal and stay healthy, and neither could we.


I thumped on the steel door of an industrial garage. Most people didn’t know the largest vampire nest in the Northeast was contained in an underground facility below this building. I kept up my third round of pounding. I knew the vampires were in there. The sun had just set. Someone needed to drag his lazy butt out of bed to answer the door. “I’m not going away!” Security cameras and microphones monitored the place 24/7. The jerks knew I was here.

I needed to feed, and to do that, I needed to get laid. Like all succubi, I survived on the energy created in my body during an orgasm. I couldn’t even stay alive on bad sex. Finding attractive, skilled partners wasn’t a problem in Lake City, but I was a sucker for falling in love. I couldn’t handle the guilt of a one-night stand, and if I tried to live off one male forever, I’d starve, which my instincts wouldn’t allow. I’d tried it once and would never allow myself to go down that road again.

Neither would my parents.

Rain plastered my short curls to my head. Normally, they stuck straight out, the different shades of autumn leaves. I’d be lucky if my suitor didn’t slam the door in my face at the sight of my drenched appearance. But I needed him in a bad way.

I added a kick to my knocking. “It’s Pia, d Live bait made all the difference, pretty much a no-brainer. If the prey hungered, it was best to use someone like me.

The door finally opened. “The Master’s not expecting you for another seven days.”

I pushed past Rat, one of Zur-Sin’s minions, and huddled in the antechamber. “I know. Tell him I have a problem.”

“What trouble are you in now, Pia?” Sin’s voice carried over an intercom by the door leading into the vampire lair. Pressing the talk button, I stood on tiptoe to speak in the microphone. “John left a note pinned to my door. He left town last night.” I hoped he was okay. Being a low-level demon bites. Someone was always on his ass.

“He’s my suitor for today.” I glanced at Rat, who chuckled. “Shut up.”

“Cooper’s on a hunting trip with the pack. Won’t be back for another three days when it’s his turn.”

“I can oblige.” Rat stroked a hand down my back.

His touch sent a wave of desire through my body, but I wasn’t so far gone yet that I’d jump anything with a dick. “Fuck off.” I shoved him away. At least, I tried to. Beauty was a succubus power, not muscle. “We made a deal, Sin.”

“Every nine days. You were just here three days ago.”

“Yeah, do the math, genius. Today’s day three in my cycle. You want me to do Rat instead? I’m out of options.” I crossed my arms and glared at the vampire lackey. I’d eat my own arm before touching him but Sin didn’t have to know that.

“Bring her down, Ratan.”

Rat’s fanged grin faded. “Yes, Master.” He unlocked the door and opened it for me like a gentleman. “Whores first.”

I pulled my jacket tighter around me and fought the shivers. Half-drowned, my need burned inside my body, the hunger for flesh rubbing on flesh setting my skin to oversensitive. If Sin didn’t take me to his bed then I’d have to find some stranger to screw. Nausea rolled in my stomach. I never should have been born a succubus. To my parent’s shame and concern, I wasn’t amoral enough.

They monitored my every meal. How much worse could my life get when my father interviewed potential lovers for me? For crying out loud, what happened with Pierre was history and they needed to let go of the past. I did. Tried…

Racing down the stairs and across the sub-basement, I strode by other vampires, all of them part of Zur-Sin’s nest. He controlled Lake City at night and my father had it during the day. That’s how I met Sin. My father hooked me up two years ago to keep me from starving. Twenty-five years old and I still lived with my parents. All four of them.

Most mortals wouldn’t understand my dad being interested in my sex life, but he worried and stressed about my lack of lovers to feed upon since I was so picky. I had three now. That should be more than enough if they would just cooperate.

I waited for Rat to twist his key in the elevator so it would travel into the secured areas below us. The doors slid open and I jumped inside. “Try not to take too long. He has appointments to keep.” With those lovely instructions, Rat keyed the doors closed and I descended into Sin’s world.

The doors slid open and a large pair of bare feet stepped into my view. A finger slipped under my chin and raised my gaze. Zur-Sin, ancient vampire warrior, stared at me with his stern dark eyes. Dressed in only a pair of black silk pajama bottoms, he looked good enough to eat. He brushed the curls from my face and frowned. “You have much to learn about the art of seduction.”

“I dressed up last time I was here. I get panicky when things don’t go my way on day threes.”

“It’s not all about appearance, Pia. You’re beautiful even when left out in the rain.” He bent and placed a gentle kiss on my lips. Sin’s touch always struck a spark—even on my off days he could lure me to his bed. “Grace and tact would be appreciated at times. You can’t barge into my nest making demands. It makes me seem weak.”

“I’m sorry.” I leaned against his solid chest. His pale skin still retained the warmth of his last feed. I didn’t ask about his latest conquest. We had a business deal signed in blood. He gave me an orgasm every nine days and I fed him with my blood. No strings attached. I think I came out on top of that deal because Sin could be a generous lover when in the right mood. And I had learned how to guide him into those moods.

He placed a kiss to the top of my head. “Next time call. I have a human secretary, remember? She’d have made quieter arrangements.”

“She hates me.” I squirmed, pressing my thighs together to help relieve the growing demands between them.

Sin sighed and led me into his apartment, through the living room, past his office and into the bedroom where he sat on the edge of his king-sized bed. He plucked a remote off the mattress and turned on some slow jazz. Leaning back onto his elbows, he ran his gaze over me. “Undress.”

Posted by Annie Nicholas at 5:21 PM
Email ThisBlogThis!Share to TwitterShare to FacebookShare to Pinterest

Excited! This sounds like it will be a good one! Thanks for the excerpt.