Up until recently The Omegas has always been my favorite cover and Daedalus my favorite hero. Then I wrote Sigma. I'm not sure I found Sam but he's a keeper and Lyrical Press made a beautiful cover for him. 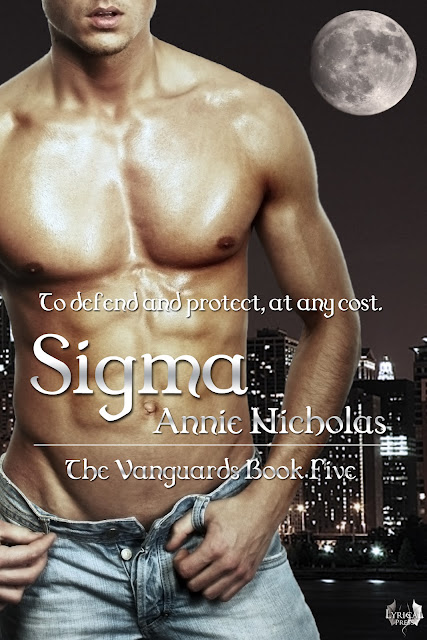 
To defend and protect, at any cost.
Sam’s self confidence never recovered when he failed to protect his best friend Sugar from an attack months ago. The urge to guard the weak ran strong in his shifter blood. So much his pack gave him the position of Sigma, defender of the innocent and frail. Too bad he sucked at it. On his way home he becomes entangled in a vampire skirmish and is left with an injured female in his arms.
As a vampire accountant for Pal Robi inc., Clementine never imagined her master would ask her to commit corporate espionage. She’s discovered and shot but a shifter, made of her fantasies, comes to her rescue. In the few hours spent with him she’s lived more than the decades spent among her clan.
Hiding on the streets of Chicago, together they fight to stay alive but can a petite vampire female break through her hero’s jaded heart?
I'll be at the Romance Times Convention this week! I'll be posting pictures on my blog all week long. If you're there come introduce yourself. I'll take your e-mail addy and send you a nice present. ;)

Posted by Annie Nicholas at 1:42 AM
Email ThisBlogThis!Share to TwitterShare to FacebookShare to Pinterest