Last Day of My Birthday Week!

It's the last day!

I have Savannah Chase and DL Jackson over to play party games.

Savannah has brought a copy of Bid For Love, her new release.

Her fantasy man is up for auction. Will Nico dare to bid?

Nico's history of romantic disasters has taught her when she gambles on men, she's fated to lose. That doesn't stop her from secretly lusting after Jeff, the handsome construction worker she sees every day on her way to work.

When the New York's Sexiest Bachelor auction begins and Jeff comes up on the block, she's seriously tempted to place a bid. The wager can't be taken lightly -- It might be for a good cause, but she's making a bid for love...


DL has brought her collections of romantic sci-fi.

Twelve hours outside of Terra II, Colonel Kaleb Titan, a molecular geneticist and commander of the Ark, faces a life or death choice that could change the fate of mankind.

The Genesis I, aka the Ark, travels with a hold full of wildlife and three crew members. When a wolf bite and genetically-altering gamma radiation transform Kaleb, he notices his senses have been heightened, his libido has gone haywire and he can’t keep his hands off his crew. Worse yet, they don't seem inclined to stop him.

When their sister ship, the Genesis II arrives early, Kaleb’s problems compound. As soon as the command crew of the Genesis II boards, one whiff tells Kaleb they’re not from Earth or who they appear to be.

When he discovers that they’ve kept the Genesis II’s crew of over two thousand alive, he begins to believe their reasons may be far more ominous than anyone could have imagined. However, he also discovers what’s holding them back. The hijackers seem to be allergic to canines.

Now they're forced to employ biological warfare against their own, but will it be enough to save humanity?

History is about to repeat and only one species will survive.

Some love affairs last a lifetime…others never end.
Fifty years into the future, if you’re one of the damned, you don’t run for your life, you run to save your soul. Jocelyn Miller is wanted for crimes she committed before she was born. Homeless, blind and out in the elements on one of the coldest nights of the year, her desperation results in a bad decision. When Jocelyn and her brother Nate rob a convenience store, Jocelyn comes face to face with her worst nightmare and greatest love, a reaper named Gabriel.

Gabriel Solaris is an Enforcer, a genetically enhanced psychic often referred to as a reaper for his ability to take souls, and he’s charged with collecting Jocelyn’s. When he finds Jocelyn outside the store, he’s sure she’s up to something illegal. Proving it isn’t necessary. He holds a warrant and it’s all he needs. But the closer Gabriel gets to Jocelyn, the more he begins to question his duty and why he believes her claims of innocence. When Jocelyn tells him she loved him once, Gabriel loses control and kisses her. Instead of taking her soul, he gives her a week to prove innocence in her past-life crimes, something he has no authority to grant.

Alice MacKay can't keep up with all the bomb threats in Trios Port. When Boomer, a former Terran Marine with more than a healthy dose of arrogance, strolls into her office for an interview, she can't get rid of him fast enough. But disarming bombs is easier than disarming amorous Marines. When Boomer decides to stick around, MacKay wonders if she's met her match.

Jenna's been infatuated with Tyson Rivers since she boarded the mining ship, but the scoop's explosive ordnance officer doesn't seem to know she's there. Too shy to introduce herself, she decides to snoop in his personnel file instead. When Tyson catches her digging, he realizes he's not the only one feeling the attraction, but could his tactics to get her alone end with a bigger bang than he expected?


And I have a print copy of Bait to give away as well! 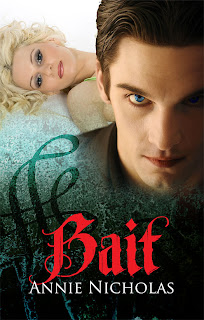 Today's draw ends tomorrow morning and I will also be drawing the grand prize winner!
Leave a comment and don't forget to leave someway for me to contact you.
Posted by Annie Nicholas at 12:04 AM
Email ThisBlogThis!Share to TwitterShare to FacebookShare to Pinterest

Well Annie it's been fun and I got some really great rec's of books to add to my ever-growing TBR pile:)

It's been a great week and I really hope you had a fabulous birthday!

Holy moly! are there some great reads there or what. Thank you for the wonderful giveaway opportunity. I hopped over today from Paranormal Haven and loved your post there today. This fellow cake lover had to sign up to follow and I look forward to reading more of what you have to say.

Congratulations on your birthday, hope you have a great day and lots of fun and new books to enjoy later. I hope to win your book please.

It's been so much fun hanging out with you this week, Annie and I hope you've had a great birthday :) Btw, this is a great giveaway, please count me in!

They all sound really good, but there's nothing like a story about a hot construction worker.

Thanks for giving us the gifts though it was your b-day. BTW, in my family it became the tradition that everyone had cake on the day of the birthday and the birthday person got the entire rest of the cake for themself (usually about 1/2). Nothing like cake the morning after!

Thanks for sharing your birthday week with us. I know this is your family celebration day, so have a blast, get a whole lot spoiled, and eat a piece of cake for us.

Thank you for the lovely giveaway Savannah, DL and Annie! All of the books sound exciting.

Sorry to see your awesome birthday week end. I hope you had a great release week!

Its been a great week.I hope you had a fantastic time celebrating your birthday.
These books sound great.
elaing8(at)netscape(dot)net

aww im sad to see ur birthday come to an end
meandi09@yahoo.com

Hope you had a great birthday week. I really enjoyed find some new to me authors and am very excited that I won one day! Thank you again!

this contest is closed