Book 2 of Not This Series

After being disowned and labelled human because she can’t shift, Betty Newman rescues unwanted dogs to fulfill her need for pack. Being rejected by her birth pack was enough pain for a lifetime and she’ll do anything to avoid subjecting herself to their prejudices.Things change when Ken Birch wakes in her kennel still in wolf form and declares she’s his soul mate. His presence wakes her feral heart and makes her long for a life she can’t have. Old wounds are opened and she refuses to listen to instinct.But only a shifter can be a soul mate and now her life is in danger by New Port’s pack. Either Betty learns to shift or she dies. Problem is the only one willing to help is Ken, the last person she wants.

Book One,  Not His Dragon is on sale for 99 cents 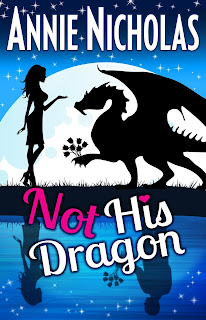 Eoin Grant hasn’t encountered a female of his race in decades, and this crazy person’s scent declares her unmated. Fate set her in his path, and he won’t let this opportunity slip through his claws. No matter how wary she is of him. After all, how many chances does a dragon have at finding love? But fate can be a crueler mistress than his perfect mate. Of all things, she thinks she’s human.Business is taking off for Angie Weldon. She put her freakishly sharp nails to good use when she opened her back-scratching spa in downtown New Port. The local shifter community pounced on her skills and she’s knee-deep in shed fur. By the end of the year, if lucky, she could afford to move out of her crappy apartment. Dollar signs flash before Angie’s eyes when a dark, brooding stranger books her solid for a week but she notices the possessive fury in his glare. She’s been around enough shifters to know the look, and she won’t go down that road again. Angie is literally swept off her feet by the intense shifter and he wants more from her than she’s willing to give. She figures it’s best to avoid eye contact and back away slowly. Until he changes her life by insisting she’s a dragon.


Posted by Annie Nicholas at 7:00 AM
Email ThisBlogThis!Share to TwitterShare to FacebookShare to Pinterest