Once a month, a bunch of authors get together and post excerpts from published books, contracted work or works in progress, and link to each other. You don’t have to be published to participate just an writer with an excerpt you’d like to share. For more info on how to participate, head over to the Excerpt Monday site! or click on the banner above. 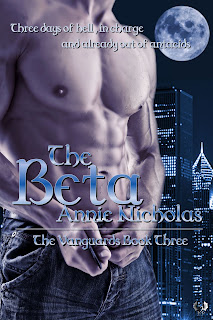 The building blocked Robert’s view of Esther as he turned the corner. His car wasn’t in this direction, but he didn’t want her to witness his jump and heel click. The werewolf blood running in his veins enhanced the excited leap, making it higher than a human’s. He bent his knees to absorb the impact of landing. Tonight, he’d kicked ass and kissed a dark-haired beauty. Her smell still lingered on his hands with the memory of how her thick, mahogany hair felt curled around his fingers.

He couldn’t believe his ears when she asked him for the time. Tall, she had long legs with a nice curve to her hips and breasts, intelligent blue eyes and a personality playful enough to draw him out his shell. She’d taken control of the conversation, no hesitation in asking him to accompany her home or in kissing him. He loved smart, confident women but one had never liked him back.

Grinning like a fool, he jogged to his car, burning off the extra energy her kiss produced. He’d wanted to do so much more with her, like push her against the wall so she could wrap her legs around his hips and allow him to grind against her core. Maybe tomorrow night, he’d get what he fantasized.

Approaching the car, he pulled out the keys. The gas gage was on empty on his way here. He needed to fill the tank, but he couldn’t recall how much cash he’d brought with him. After working for banks and credit card companies for the last few years, he never liked using either, not trusting the system. His right back pocket, where he usually placed his wallet, was empty. Checking the left pocket, his heart sank into his gut as it turned out empty as well. He patted the front ones and only found his cell. Maybe he’d dropped it while wrestling with Talon?

Deep down inside, he knew the truth. Esther.

He was such a fool. Beautiful women didn’t ask geeks like him for a kiss. Grinding his teeth, he pictured her laughing at him as she flipped through his wallet, counting what little cash he carried.

The hole in his gut grew wider. Crap, he didn’t have anything to buy gas and no way to get home but his own two feet. The last thing he wanted to do was call Daedalus or anyone from the pack for a lift. He’d never hear the end of it.

Respect was something you earned, and how would he ever obtain any if he fell for obvious scams?

Clenching his fists, Robert turned around and marched back to where he’d left Esther. His beast stretched inside him, frustrated that he wouldn’t release it. Control over one’s inner monster sounded easy, but the struggle became an hourly routine. Shifters dealt with this all the time, day or night, in sickness or in health. The first rule of the Vasi pack was human dominance over animal instinct, because once the beast started calling the shots the shifter began to forget right versus wrong and listened to the laws of the jungle instead.

Robert crouched by the spot where Esther had stood as she’d kissed him. Sometimes animal instincts came in handy. Her scent left a trail. He wanted his wallet back, and his pride.

﻿
Links to other Excerpt Monday writers

Note: I have not personally screened these excerpts. Please heed the ratings and be aware that the links may contain material that is not typical of my site.

Posted by Annie Nicholas at 1:00 AM
Email ThisBlogThis!Share to TwitterShare to FacebookShare to Pinterest